Everything ECMO – Part One 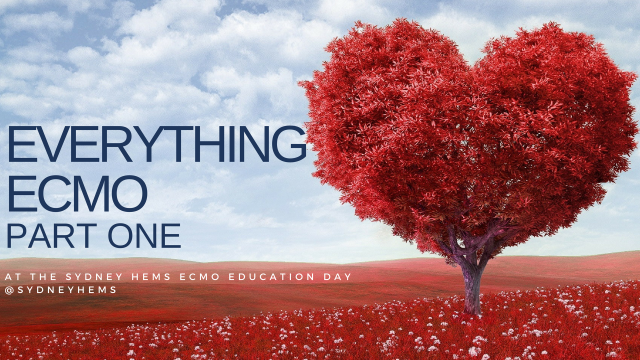 Most of the following post is taken from the recent Sydney HEMS ECMO Education day with some taken from an earlier ECMO education day and amalgamated into a huge amount of notes.

Associate Professor Paul Forrest, a Cardiothoracic Anaesthetist and ECMO Specialist from RPA Hospital kicked off the day with an overview of the evolution and current state of ECMO services in NSW. He has a full uploaded presentation here you might be interested in or you can watch the full video below.

There are agreed statewide indications for ECMO – clicking on the link will take you to the document.

How does it work in NSW?

Who goes on the mission?

Where do patients go for ECMO?

Patients are routed to St Vincent or RPA as per the Medical Retrieval Unit who oversees the mission.

When did the service start?

The initial service commenced prior to the H1N1 outbreak – this paper in JAMA Oct 12 2009 describes how the service was utilised during the outbreak. 68 patients were treated with ECMO for a median of 10 days (IQR 7-15 days) with 48 surviving to ICU discharge (32 to hospital discharge, 16 still inpatients) at the time of publication.

How is ECMO undertaken during retrieval?

The Cardiohelp pump is used with a customised footplate. When an ECMO team is tasked for a retrieval mission, the team will come with four custom packed retrieval packs of their own.

58% of ECMO transfers are transported by road, 27% by fixed wing and 15% by helicopter.

How successful is ECMO in NSW?

The St Vincent’s team, headed up by the wonderful Sean Scott,  joined us for an ECMO themed sim. Learning was centred around an interactive simulation, the retrieval of a 55 year old patient from a smaller hospital in conjunction with the ECMO team.

Our role in these missions as the retrieval team: to take care of the patient, while the ECMO team takes care of the ECMO machine and pipes (“it’s not about the plumbing”). The full talk is shown in the video below.

The Two Types of ECMO

ECMO is basically a heart and a lung – a pump and an oxygenator. Where you plug in the pipes determines the sort of support you (the patient) get(s).

We should consider ECMO as a bridge; generally it is used as a bridge to recovery but sometimes to a decision (further resuscitation? Transplant?) or definitive intervention (treatment of cause of cardiac arrest).

This is effectively lung bypass, used when the “lungs don’t work” – there are many causes, for example:

Needs to be a potentially reversible cause

This is effectively heart and lung bypass, used for support in circulatory failure – cardiogenic shock is the most common/obvious reason (although the underlying cause may be MI, overdose etc.)

Trauma? – has been used in hypotensive trauma patients

Sepsis? – jury is out on whether this is a good idea (how reversible are the processes involved?)!

How does it work?

Most common is femoral/femoral VV cannulation

Fem/fem – two cannulae in IVC, one draining and one returning – can’t use two multistage cannulae (recirculation – when blood doesn’t actually flow through the circulation – is very high)

What about in Cardiac Arrest?

Now features in the 2015 ALS guidelines under “consider” (extracorporeal CPR)

However, it doesn’t “consider” all the logistical work involved in getting people onto ECPR

ECPR means we should add a few new links to the chain of survival – mechanical CPR on scene, ECMO in ED, straight to cath lab

ECMO remains on after ROSC (the flow may be dropped a little) – the patient is usually in cardiogenic shock so needs the ongoing support.

How has ECPR been achieved?

Pit crew concept – everyone has defined roles, printed on role cards which they wear

This video shows how this is trained for through simulation.

The target of ECPR is maintenance of cerebral perfusion while reversible causes are addressed.

Prehospital Training for 2CHEER was key, with a strong focus on changing the dynamics of arrest calls.

BatPhone activation to the ECMO centre is essential for team preparation

Clear role development and allocation with role cards (A5)

This training is not particularly frequent – one a month or so – which is helpful for refreshing and framing behaviour.

Should everyone get ECPR?!

No! There are STOP criteria – although in practical terms it is advised that processes continue until there is a reason to stop

How do you echo with all this going on?

5,000 units of heparin are given when the cannnulae go in. An extra (approx.) 7,000 units are given with the pump (which is primed with 10,000 units, there is some loss during connection).

The venous line is connected first due to risk of clots – they would then be sucked into unit, not into brain (as would occur if arterial line placed first).

What if the cause of arrest is a SAH?

VF arrests can occur with SAH – 15-20% of patients on ECMO end up with ICH (pre or resultant), CT brain is deferred until after definitive cardiac intervention, which may be >24h.

What about for massive PE?

Who is suitable for eCPR after out-of-hospital arrest?

In-hospital, the team might be more lenient with rhythm (but would still need to know there’s a reversible cause)

Who is not suitable?

What are the common complications?

In standard elective VA ECMO, clinicians would put in a backflow cannula from arterial cannula to perfuse the distal limb. Smaller cannulae are used in ECPR to facilitate distal perfusion; after angiography, a backflow cannula is sited.

What happens in the Precannulation phase?

(this is essentially a checklist for the ED Consultant)

What happens in the Cannulation phase?

Can stop LUCAS but priority is excellent ongoing CPR

Defibrillation is not necessary during the cannulation phase

What’s the Evidence for all this?

It’s not awesome as yet – there are not many RCTs.

This study took place in Melbourne (hypothermia was dropped) – there’s a great review of this paper over at The Bottom Line.

Notably although 90 were randomised to ECMO, only 70 went onto ECMO

You can find another great review over at the Bottom Line.

Where can I find out more?

Loads of resources over at IntensiveCareNetwork.com